Do Chameleons Have Teeth? 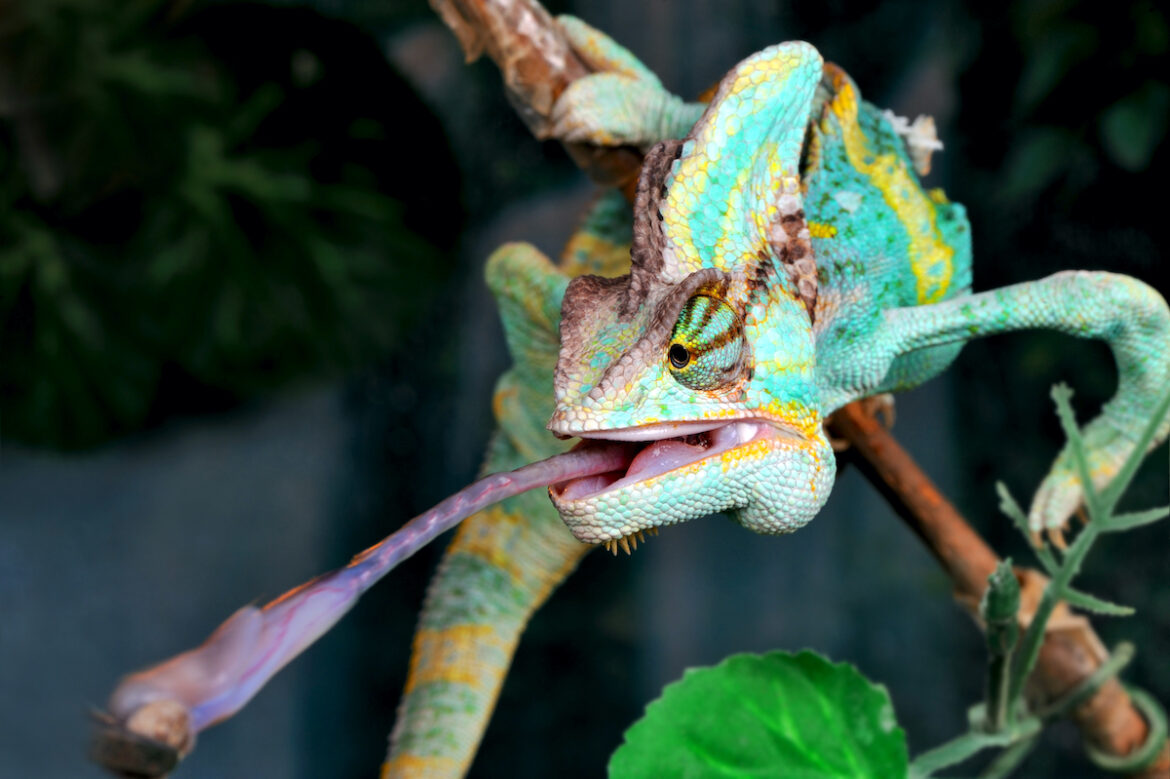 It might not be so obvious at first, and if you are looking to have a chameleon as a pet, or if you are just curious, you might be wondering if chameleons have teeth.

Chameleons seem laid back and delicate and are fascinating creatures. When you think of a chameleon, you don’t necessarily think of them with rows of teeth!

So, do chameleons have teeth? Chameleons do have teeth, unlike some other reptiles. Their teeth are triangular and small, and quite spiky. A chameleon’s teeth are acrodont, which means that they do not have roots, and instead, the teeth are fused to the base of their jaw.

There are a few different reasons why chameleons have teeth, what they use them for, and other interesting facts to learn, so keep reading to find out more!

All About Chameleon Teeth

Chameleons do have teeth, and while these teeth might be difficult to spot from outside of their mouth, they are quite important to a chameleon’s survival.

It is difficult to spot chameleons’ teeth as they are very small, but they are sharp and spiky. Their teeth are quite small even compared to other reptiles of the same size.

The interesting thing about a chameleon’s teeth is that they do not have roots, and are acrodont teeth. This means that they are fused to the base of their jaw. They do not have baby teeth, and if any of their teeth fall out, they will not be replaced.

If a chameleon’s teeth start falling out for no particular reason, it could be a sign that something is wrong, and you should speak to a specialized vet. The more teeth they lose, the more problems they will have with eating and chewing.

Why Do Chameleons Have Teeth?

Chameleons might have small teeth, but they have them for a reason! These sharp, spiky, triangular teeth serve some important purposes in a chameleon’s survival, and without them, they will have some great difficulty.

The shape and size of a chameleon’s teeth are very specific and are perfect for the food that chameleons eat – insects such as crickets and locusts. As chameleons do not swallow their food whole, like some other reptiles, their teeth are important to help break the food down.

Here are the main reasons why chameleons have teeth:

Chameleons will need to rip and cut up food using their teeth if the insect is too big to fit into their mouth whole. This is often the case for live insects such as crickets and roaches, which can be considerably big.

As chameleons do not swallow their food whole, they need to bite their food down into manageable pieces before even beginning to chew it. The sharpness of the teeth, and the strength of the teeth being fused to the bone, help with this process.

If the chameleon does not chew the food down to the right texture and size, then it could pose a choking hazard. With the teeth being so sharp and strong, they can easily chew down food. However, if the chameleon loses too many teeth, it could be difficult for them to properly eat and this could spell disaster for your pet.

In the wild, male chameleons can get into fights with each other. Often, this fight is caused by territory or a female, with the two chameleons fighting over either.

During a fight, the male chameleons bite, head-butt, and push each other. While their teeth are small, they can do damage to another chameleon, causing rips and tears in their skin.

Chameleons held in captivity do not usually get into fights, as they usually have their own enclosures and do not feel the need to fight over territory or a female partner.

If it comes to it, a chameleon, male or female, could use their teeth as protection. If there is another chameleon or another animal that is attacking them or putting them in danger, they could try to use their teeth to defend themselves.

They could bite and push away at any danger in their way, and even though their teeth are small, they can definitely help to fight their way out of a situation where they could become hurt or even killed. The small teeth are sharp enough to cause pain to their attacker.

Can A Chameleon’s Teeth Fall Out?

A chameleon’s teeth can fall out, and this is a natural occurrence, but if one too many teeth do fall out, it could cause quite a problem for the chameleon with eating and swallowing food.

There are a few reasons why a chameleon’s teeth might fall out, and it is worth noting what these are in order to keep a check on your chameleon and see if their tooth loss is normal or if it is something that you should be concerned about.

In some cases, there are things you can do to prevent their teeth from falling out. As their teeth are not replaced, this is really important for their health.

A chameleon might lose teeth by biting down on a hard object. They might be trying to bite down on an insect, and instead bite down on a rock, a cage, or even a branch. If they bite hard enough, then it could cause their tooth to break and fall out.

Where the tooth breaks will depend on how they have bitten the hard object, whether it breaks down near the jaw or if it is just chipped in half.

When male chameleons fight each other, there is a possibility that they could end up losing their teeth in the process. During a fight, they would try to bite their opponent as hard as they possibly could, and this could cause the tooth to break and fall out.

This is a natural way for male chameleons to lose teeth, especially when out in the wild, but chameleons that stay in their own enclosure should not have any problem with this at all.

Some reptiles, even chameleons, can suffer from gum recession. It can start while they’re young or begin later on in life, but it is something that chameleon owners do come across.

As the gum recession happens, more and more of the teeth are exposed, and this can put them at risk of breaking more easily. The teeth will not necessarily fall out due to gum recession, as they are fused to the jaw, but it does increase the risk of breakage.

There are certain sicknesses and illnesses that a chameleon could have which may cause their teeth to fall out. This could be from a lack of certain vitamins or minerals in their diet, which could also compromise their immune system. The illness could also be caused by parasites.

It is so important to keep a close check on your chameleon and the state of their teeth in order to pick up if there might be any other health issues!

Will A Chameleon Bite?

Chameleons are not very aggressive animals and are more laid-back if left alone. However, like with any animal, a chameleon might become defensive if threatened, and bite to try and protect themselves.

It is not advised to handle a chameleon, as they are not the right reptile to be held and played with. Instead, you should provide them with a suitable enclosure and watch them enjoy their time alone!

Chameleons do have teeth, and these small, triangular, and spiky teeth play a very important role in a chameleon’s survival. Just like us, they use their teeth to rip up their food to make it easier to swallow, as they do not swallow their food whole.

A chameleon does not grow back any teeth if they fall out, so you will need to keep a check on your chameleon’s teeth to ensure that they are healthy and all in place!

Chameleons do not like to be held and prefer to be left in their cage alone. They are not the right pet to be affectionate with and should be given the right home to live in and be watched from afar.

How Long Do Chameleons Live?

Chameleons kept in captivity can live for between 3-10 years, depending on the chameleon and how well they are cared for.

Up Next: Chameleons Vs Bearded Dragons As Pets – How To Choose

Why Is My Leopard Gecko Digging?