Home Exotic Pets Can Turtles Flip Themselves Over?
Exotic Pets 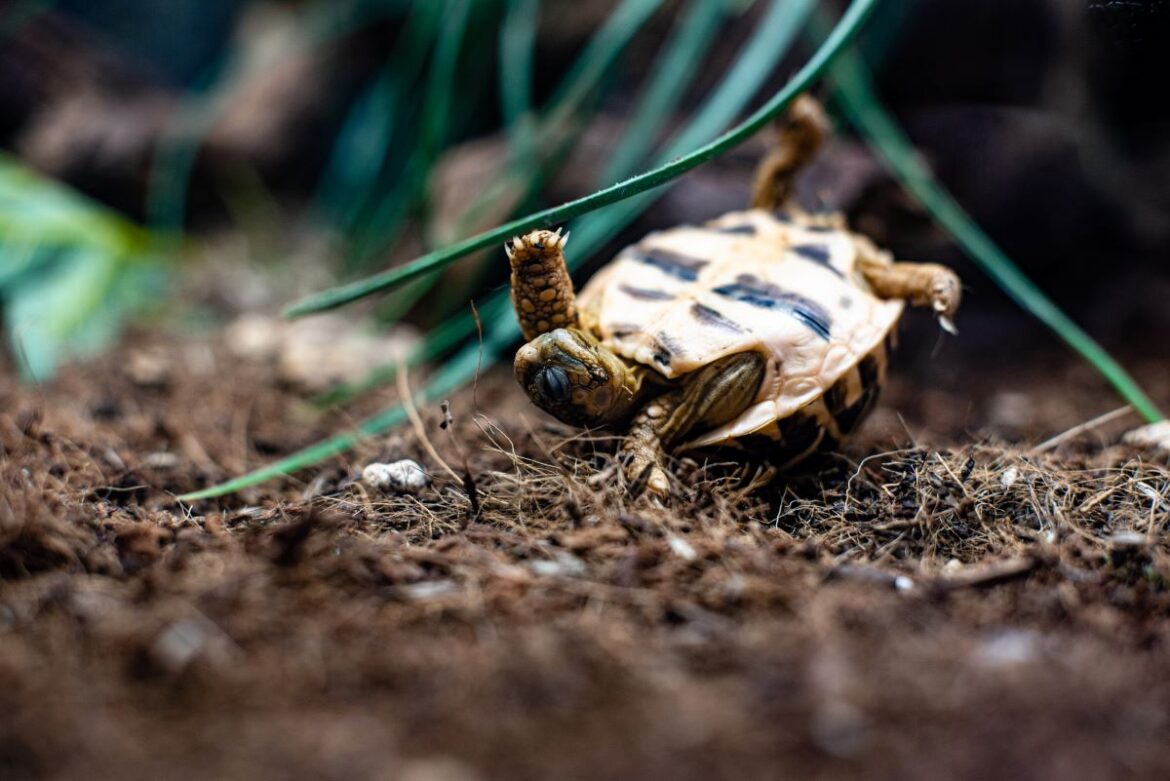 Turtles are one of the most popular domestic pets in recent times since they are so adorable and entertaining to watch. However, turtles have their weaknesses just like any animal and require careful observation. This is especially true if they get flipped over on their backs.

Turtles can get turned over when they’re climbing something too tall, when facing stronger males, or when a predator captures them. Now, the turtle’s shell might protect them attacks of a predator or competition, but if the turtle gets turned over upside down, they’ll have quite the task ahead of them when trying to flipping themselves back over.

So, can turtles flip themselves over? Turtles can use their necks and their hind legs to flip back over, but it’s not as easy as it might sound. If you happen to find a turtle flipped over on their back, it’s best to give them a hand and flip them back up, as it’s not always possible for them to do so themselves.

Let’s dive into the topic to understand more about how turtles get flipped over in the first place and how they manage to turn the tables all by themselves.

How Turtles Get Turned Upside Down?

As mentioned earlier, turtles might look lazy and laid back, but these animals are no fools. They certainly know how to fend for themselves and win the hearts of their lady love.

Here are a few of the causes that your turtle might get turned:

The earliest known turtle fossil is exactly 220 million years old. These primitive creatures have been known to be around since the Triassic Period.

So, if you think that these highly intelligent reptiles haven’t mastered the art of flipping themselves over yet, you have it wrong. Yes, turtles can flip themselves over. In most cases, they are actually quite well equipped for the task.

But, there are times when external factors play a significant role in undermining this ability. In such circumstances, the turtle forfeits their struggle only when they have exhausted all of their means to preserve their life.

What Can Happen When The Turtle Stays Upside Down?

Turtles cannot survive long without food or water. If a turtle does get turned over and does not manage to flip themselves over, then they face the possibility of death.

Turtles have no mechanism to store food. So, when a turtle gets capsized, they better flip themselves over or face the real chance of starvation. Without access to water, turtles might become dehydrated too.

Furthermore, when turtles are tossed over on their backs, they are exposed to far more danger. The hard-back shell of the turtle might be impossible to crack, but the underside is not as impenetrable or tough.

If the turtle is turned over and a predator does come around with stronger jaw power or really sharp teeth and claws, then the poor turtle might not make it out alive.

How Do Turtles Flip Themselves Over?

When turtles get stuck upside down, the first thing they do is stretch their neck as far out as possible. Then the turtle swerves their neck to one side, which makes their entire body tilt to one side. Turtles might seem inflexible, but they are actually good at using their limbs to maneuver in all directions.

Finally, the reptile uses their hind legs to give themself a massive push against the ground to turn themself upright. Some turtles even have a more curvy shell that naturally prevents the turtle from staying flipped over for long. All the turtle has to do is roll to one side, and the shape of the shell helps the turtle achieve their goal.

But, you have to understand that such antics require precision, skill, and lots of luck. Even with lots of luck, sometimes turtles have to make several attempts before they manage to get the trick right.

In most cases, this method does work in the turtle’s favor. But, there are times when repeated endeavors and bad weather can further the plight of the turtle rather than help their cause. This is why it’s never a bad idea to offer a helping hand to a turtle in a jam!

What Species Of Turtles Have A The Toughest Time Flipping Over?

But, flat-back turtles fall into the food chain like the rest of the animal kingdom. And when a flat-back is faced with a fierce predator, they rarely come out of it alive. And, sadly, there are cases when the turtle has survived the attack only to die of starvation or thirst.

Flat-back turtles seem to be a chink in the evolutionary armor. But, when you consider that there are over 356 different species of turtles and only one flat-back species of turtles, you may begin to hope that evolution is on the right track at the very least.

Turtles are genuinely spectacular animals that make lovely pets. They are low-maintenance and require little of their owners’ time. But, being a pet parent or even a responsible citizen, if and when you encounter a turtle that is turned over, do the poor creature a favor, and help it along the way by flipping them over.

Pets like turtles might not have natural demands on their owner’s attention, time, or resources. But as a pet parent, you should present your adorable pet with as much time as you can spare and with plenty of love and attention. As for wild turtles, they have literally evolved over millions of years and have much experience turning themselves over.

It might seem that Nature has only seen fit to equip turtles with a shield and nothing else. But, when you watch a turtle flip over, witnessing the flexibility of their neck and the power and dexterity of their limbs, you will understand that Nature has not been stingy. Nature has simply been crafty when it comes to the tools it has bestowed upon the humble turtle.

Up Next: Can Frogs And Turtles Live Together?