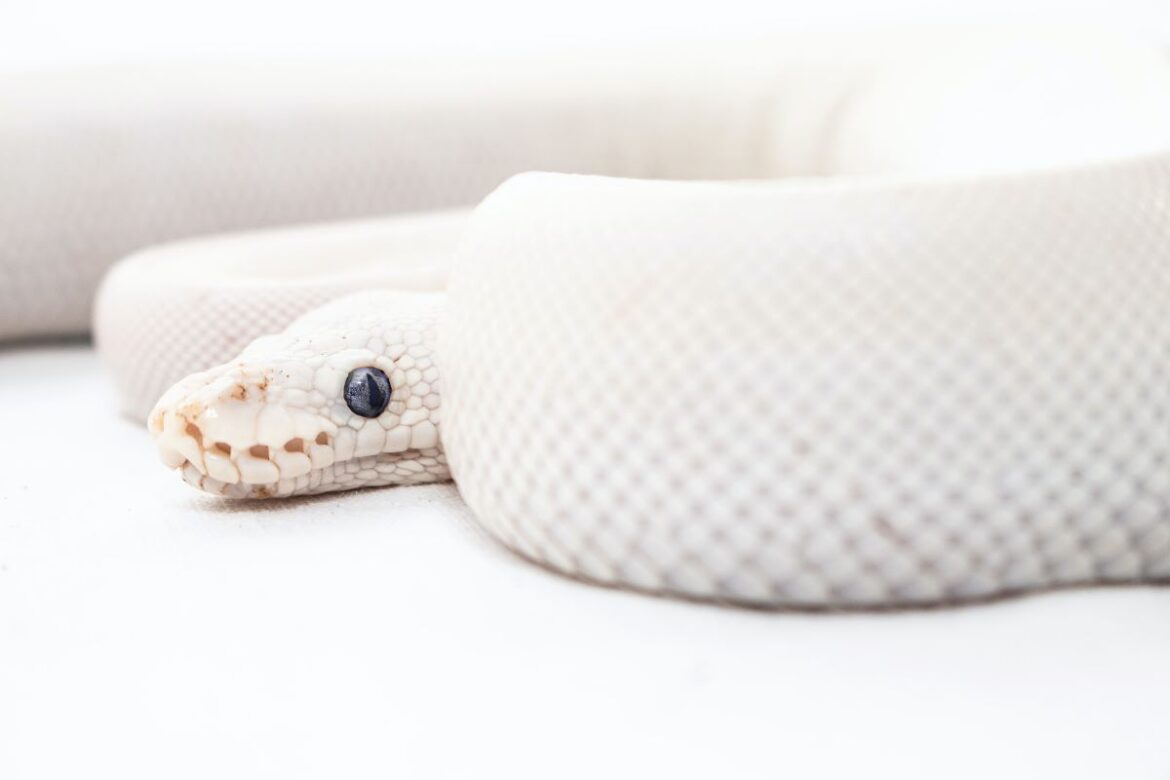 Animal lovers across the globe are fascinated by the sight of snakes, but there’s no denying that some believe that snakes are high-maintenance or intense pets to handle. However, in truth, there are many different species of harmless and friendly snakes that reptile enthusiasts can adopt, and many of them are quite easy to care for.

In addition to so many species available to adopt, there are also thousands of colors, or morphs, to choose from. And no morph quite outshines a white snake. However, novice snake keepers have to consider several factors before adopting a snake, and the most vital aspect to consider isn’t the color.

Nonetheless, it isn’t an impossibility to get a white snake anymore, as breeders have managed to get more morphs and selectively bred these snakes to get all-white or primarily white colorations. And the most welcome news for new snake owners is that many of these white snakes are easy to care for and make great pets.

So, what are the best white pet snakes? If you’re looking for a white snake that’s low-maintenance, not too big, and very docile, nothing quite beats an albino or leucistic ball python. They’re one of the easiest white snakes to find as well. However, white corn snakes and rat snakes may be less expensive and don’t grow as large.

If you want to get your hands on a gorgeous all-white snake, then we’ve got you covered with a guide to the best species and morphs to choose from, as well as some other helpful information, so stick around!

What Are The Best White Snakes?

White snakes are relatively rare in the wild. As a matter of fact, the search for a white ball python once went on in Africa, and it took years before the snake was found and sold for over $150,000 in a private auction. All-white snakes without any mutations are almost extinct.

You will see slightly white or completely white snakes in this day and age as there are now thousands of snake morphs available. But, all-white snakes in recent times are not a marvel of Nature. These creatures are a creation of selective breeding. Almost all white snakes are either albinos or leucistic, or a combination of the two.

In recent times, though, breeders have used selective breeding to develop morphs that have significant levels of white coloration or are mostly all-white. And due to the increased availability of these snakes, the price of buying or adopting a white snake has become more affordable.

The Most Popular White Snakes

Here’s a list of the most beautiful white snakes you can keep as pets.

Why Are White Snakes So Rare?

While it is true that animals, even snakes, do suffer from albinism or leucism, it is a rare skin mutation. You have to understand that snakes are, by nature, predators. An all-white predator would have a real tough time blending into the environment.

A white snake would have a ridiculously difficult time sneaking up on their prey. And although few animals hunt snakes, there are still quite a few out there that don’t mind snacking on the occasional noodle. A white snake would stand out so much that it would be pretty easy for most other predators to find them.

So, the demand for white snakes has become a challenge for breeders who use their skills with selective breeding to breed partially white or all-white snake morphs.

Which White Snakes Are The Rarest?

According to many snake experts, white snakes are relatively unique and are difficult to find. But, it is not entirely unbelievable to come across to white snake even in the wild. In 2017, Northern Territory in Australia, a rare white snake was found that was handed over to the Territory Wildlife Park.

Also, there are the medium-sized cobras with a more slender build than other elapids within the genus Naja. The body color of this species ranges from grey to brown to black, with white spots.

At times, the white color pattern is so prolific that the cobra is mistaken to be white. Nonetheless, white cobras, or rather albino cobras, do exist. However, white cobras are almost extinct.

Where Do White Snakes Come From?

Basically, you have to consider genetics when you speak of white snakes. We as humans have specific physical traits due to our DNA in the genes that we carry. The DNA determines what color your skin, eyes, and hair will be, along with your height and other physical features.

Snakes are no different. All reptiles have genes that determine their color. However, certain mutations can occur that can significantly impact the genes, such as albinism. These mutations can then be bred and basically mix-and-matched through selective breeding to bring out different patterns and colors.

Albinism is a mutation to the gene that prevents the production of pigment known as melanin. It is due to melanin that we have different skin colors. The more melanin you have in your skin, the darker your skin will be.

When snakes get albinism, they lack melanin in their skin altogether, becoming mostly all-white. This lack of pigmentation is often referred to as the ‘bleached’ look.

Now, you know that the all-white look might come from albinism. But, you should also know that albinism only affects the pigmentation production of melanin in the skin. However, other color pigmentations are found, particularly in snakes. Snakes have carotenoids as well. So, when a snake is an albino, they might not be all white.

Leucism is an abnormal condition of reduced pigmentation in various animals, including reptiles. Leucism is when you see animals marked by overall pale patches or reduced coloring in different parts of the skin.

Unlike albinism, leucism is a mutation that affects melanin and all other color pigmentation production and can be seen everywhere, from skin, to hair, to feathers.

A leucistic snake loses (entirely or partially) the melanin and carotenoid production. So, you will see that a leucistic snake is either completely white, has patches or spots of white, or has some color with an almost white background.

Therefore, snake experts claim that most all-white snakes are leucistic morphs. Albino snakes do have some color due to their carotenoid production.

How Do Breeders Use Selective Breeding To Create Pure White Snakes?

As mentioned earlier, all-white snakes are rarer than diamonds in the wild. It costs more than an arm and a leg to get an actual all-white snake right out from the wilderness. But, reptile fans love the unique and uncommon. So, breeders have prioritized catering to the demand of providing partially white or all white snakes.

Breeders who were lucky to get their hands on an albino snake or leucistic snake or some breeders who spent millions of dollars to acquire an all-white snake used repetitive breeding to reproduce morphs with as little color as possible.

When these morphs were further bred with albino or leucistic snakes in elaborate breeding programs, they successfully created snake morphs that were all-white. You have to understand that these breeding programs result from many years of selective breeding, research, and hard work.

Initially, breeders worked with white pythons, but you will now find that all-white snakes are found in many different snake species. Many breeders choose to use snake species that are docile and friendly so that even the novice snake owner can easily adopt or buy a white snake.

You will find that the list of the most popular white snakes includes Corn snake, Python, Rat snake, and Western Hognose. These snake species are considered the easiest to care for and easy to feed. In addition, the corn snake is known to be the gentlest of snakes who doesn’t even seem to mind much human handling.

How Much Do White Pet Snakes Cost?

Unlike adopting a dog or a cat, reptiles require special care and attention. So, it isn’t a pet that all animal lovers are recommended to keep, especially if you have babies or small children at home.

However, you will find plenty of reptile fans who will house more than one snake despite their babies. Nonetheless, such snake owners have to maintain extreme care that their pets or babies do not ever interact and that their pets are not harmed in any way due to negligence.

Speaking of buying a white pet snake, you have to realize that breeders have had a tough time creating snake morphs that are all white. It has taken many breeders years, not to mention money and effort, to bring about an amazingly white snake that will make your eyes go wide with wonder.

You might have to spend several hundred dollars for a partially white snake and several thousand dollars for an all-white pet snake. A Blue Eyed Leucistic Ball Python will cost you around $600 – $1500. A Super Phantom Reticulated Python can cost anywhere from $2500 – $400.

Also, the more reputed the breeder, the higher the price tag will be attached to your white pet snake. But, with well-known snake breeders, you also have the surety that your snake will not have any other congenital disabilities or carry any diseases.

Snakes make pretty fabulous pets. These reptiles are a delight to watch, and contrary to popular belief, most snakes are relatively easy to care for, and most are mild-tempered.

After years of careful selective breeding, most white pet snakes are morphs that breeders have created. In most cases, white morph snakes come from either albino or leucistic snakes or a combination of both.

The most popular white pet snakes are reasonably small-sized and docile. But, if you do go for a well-reputed breeder, then you will have a disease-free white snake, but you might end up with a sizable dent in your pocket.

The only time you should consider keeping a super phantom reticulated ball python is when you have a decent amount of knowledge about snakes and the care and attention these creatures require.

Up Next: Can Ball Pythons Swim?

Molly Fish Giving Birth Signs (What To Look For)