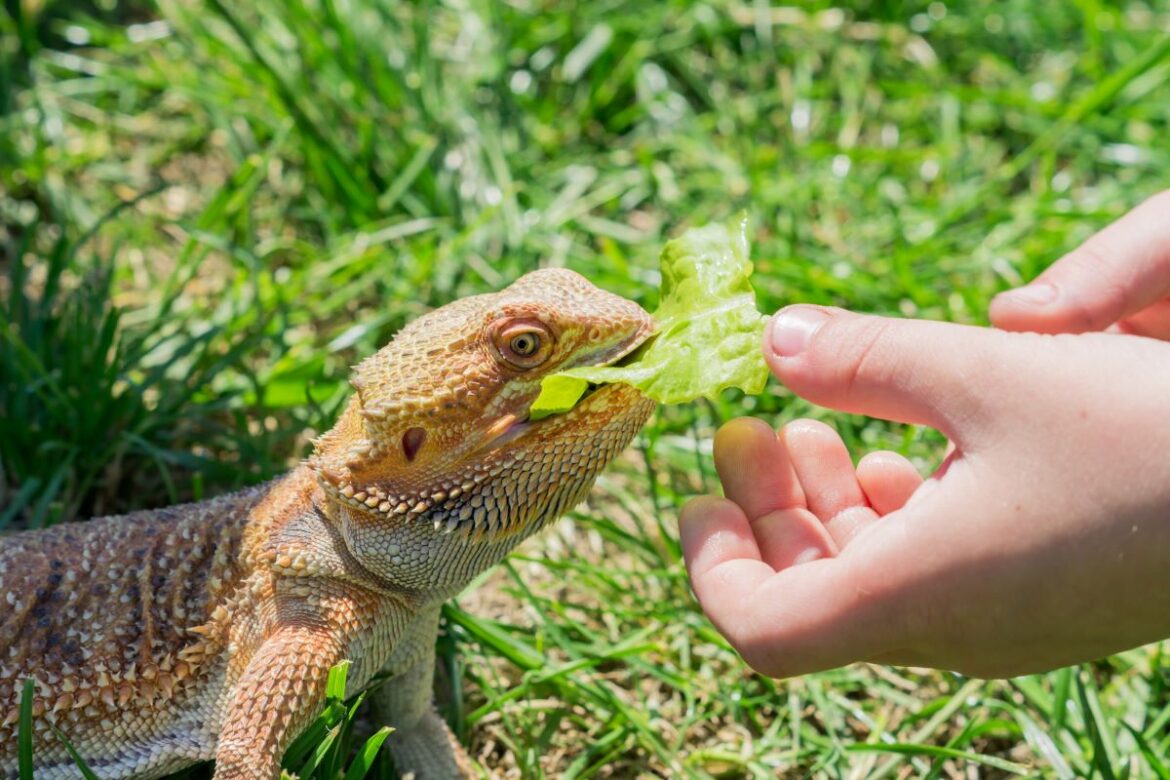 You either love cilantro or you hate it, but for the households who keep a stash of fresh cilantro in the fridge, it might be tempting to share some with your bearded dragon as a treat.

Can bearded dragons eat cilantro? Cilantro is safe for bearded dragons to eat, as long as it is fed to them in moderation. It is perfectly fine to add some chopped cilantro in your bearded dragon’s food once or twice a week for flavor and nutrition, but it should not become a daily meal for them.

Cilantro is also commonly known as coriander, and the name for the plant is used interchangeably depending on where you are in the world. The herb can be consumed fresh, or the seeds can be dried and ground down into a spice.

It is much more worth your while feeding fresh cilantro to your bearded dragon rather than sprinkling some dried coriander onto their food. They will likely enjoy the fresh taste and texture of the cilantro!

Is Cilantro Safe For Bearded Dragons?

It is perfectly fine to feed cilantro to your bearded dragon, and it is probably an addition to their meals that they will really enjoy.

Cilantro is safe for bearded dragons, but this does not mean that you should feed it to them daily. It offers good nutritional benefits to your bearded dragon, as well as being tasty for them as well.

Giving your bearded dragon too much cilantro could cause them to experience digestive issues, which really is not worth it. As cilantro is a herb rich in vitamin A, which can be great, too much could cause a certain disease that is fairly common in reptiles who are kept in captivity, Hypervitaminosis A, which is too high a level of vitamin A.

Other than this, feeding your bearded dragon a small amount of cilantro every now and then is perfectly safe, and should not cause them any harm if you only do so in moderation, and the herb will also add some great nutrition to their diet.

What Are The Benefits Of Cilantro For Bearded Dragons?

Cilantro is a great source of nutrition and vitamins for bearded dragons, and it can add some great benefits to their diet.

Some of the vitamins and minerals that cilantro contains include:

Other than these great vitamins and nutrients found in cilantro, it has some other great benefits as well that we’ve listed below.

Cilantro contains more calcium than it does phosphorus, at a ratio around 1.4:1, which is a great ratio range for bearded dragons, as the phosphorus will not overtake the calcium supply of your bearded dragon, which helps prevent metabolic bone disease.

As it is a herb, cilantro does not contain any sugar. This is great as bearded dragons definitely do not need any additional sugar in their diet, as too much sugar can lead to different health issues for them, such as diabetes, kidney problems, and obesity.

Cilantro contains a great number of nutrients and vitamins, but it is also made up of around 92% water. This helps provide some great hydration for your bearded dragon, which is always a great addition. However, too much water can cause digestive issues, which is why it should only be fed to them on occasion.

How Often Can I Feed Cilantro To My Bearded Dragon?

The other problem is that while cilantro does contain some calcium, it only contains a small amount, and it isn’t high enough in the nutrient and some other nutrients and vitamins to be a healthy staple green in your bearded dragon’s daily food.

Sprinkling a small amount of cilantro onto your bearded dragon’s food once or twice a week, or every other day should be safe and fine for them. Just a small sprinkling every now and then will not do them any harm and can help supplement some extra nutrients into their diet.

Some of the best greens to include in your bearded dragon’s diet includes collard greens, mustard greens, turnip greens, alfalfa, and endives. These are all full of nutrients and vitamins that are great for your bearded dragon. Another great option is to feed them dandelion leaves, but these need to be thoroughly washed and pesticide-free.

How Should I Feed Cilantro To My Bearded Dragon?

Every few days, you can sprinkle a bit of fresh cilantro onto your bearded dragon’s normal food, to give them some extra flavor and a boost of nutrients.

You do however need to be careful of the cilantro you feed your bearded dragon, to make sure it is safe for them to eat.

Whenever possible, choose organic cilantro for your bearded dragon. This will help ensure that it is free from harmful pesticides and chemicals and that it is kept as natural as possible.

Before feeding cilantro to your bearded dragon, you also need to ensure that it is washed properly first. This will help remove any remaining pesticides and wash away any dirt or bugs that might still be found on the cilantro.

Another option is to wash the cilantro and offer it on its own to your bearded dragon. They might eat it all up, or they might not like it on its own. If they eat it up on its own, that’s perfectly fine, but don’t offer too much, maybe one or two stalks.

What Can I Mix The Cilantro With To Feed To My Bearded Dragon?

If you are wanting to chop the cilantro up and add it to a meal for your bearded dragon, you might be looking for some inspiration for cilantro meals that you can provide to them!

It is so important to ensure that your bearded dragon has a balanced, healthy diet, and the foods you feed them are directly responsible for this. They need a variety of salads, greens, veggies, and fruits to keep them healthy.

One idea is to make a salad with some carrots, bell peppers, and cooked squash, all chopped up small, and mixed in with some chopped up cilantro.

You could also add in some chopped-up cilantro to blueberries or to some sliced-up strawberries too. A simple meal of cooked squash with cilantro is also a great meal.

It doesn’t have to be too complicated really, you just have to prepare your bearded dragon’s food as normal and mix some chopped cilantro in.

Other than cilantro, some other fresh herbs that you can occasionally add to your bearded dragon’s meal include sage, thyme, fennel, basil, and lavender.

Your bearded dragon can eat fresh cilantro whole, but it is better to chop it up and place it into a salad first, just to avoid any leaves becoming lodged in their throat.

Can I Feed My Bearded Dragon Frozen Cilantro?

You should avoid feeding your bearded dragon frozen cilantro. The cilantro will hold onto quite a bit of moisture when frozen, and this could lead to diarrhea and stomach upset for the bearded dragon.

When feeding your bearded dragon cilantro that has been frozen, it should be completely thawed first, but it still might contain too much moisture when it is thawed. Fresh is always best, and you should only feed them frozen and then thawed cilantro when you don’t have access to the fresh version.

Frozen cilantro can also be quite hard and solid, and this could pose a choking hazard to your bearded dragon, and it really just is not worth the risk at all. The nutritional content will also decrease when the cilantro is frozen and then thawed.

Can I Give My Bearded Dragon Cooked Cilantro?

It is best to avoid giving your bearded dragon cooked cilantro. The reason for this is that when cilantro is cooked, it can contain quite a bit of moisture, and too much moisture and water for a bearded dragon can cause digestive issues and diarrhea.

Cooked cilantro will also lose some of its nutrients and vitamins when it is cooked, so your bearded dragon will not benefit all that much from the inclusion of cilantro into its diet.

Here is a quick breakdown of the nutritional content of cilantro. Around 100 grams of raw cilantro leaves contain the following nutrients:

Can I Feed The Stems Of Cilantro To My Bearded Dragon?

Can I Feed Cilantro To A Baby Bearded Dragon?

You do just need to be wary that because of their size, a baby bearded dragon’s diet needs to be very accurate, and you need to ensure they are fed all of the nutritious food that is beneficial to their growth.

They can be fed some chopped-up cilantro every now and then, but only in small amounts and only if chopped up small so they don’t pose a choking hazard.

Too much cilantro can cause digestive issues for a bearded dragon, and because of the high water content, could also cause diarrhea and then dehydration, which can be a serious condition for them.

It is perfectly safe to feed a small amount of cilantro to your bearded dragon, but only in moderation!

There are quite a few fresh herbs that bearded dragons can eat, which can be chopped up and added to their meal. These include rosemary, cilantro, sage, parsley, lavender, fennel, thyme, and dill.

Which foods should bearded dragons not eat?

Bearded dragons should not eat onion, chives, mushrooms, celery, lemon, orange, and iceberg lettuce. These are all unsuitable for different reasons. It is so important to check up on foods before adding them to your bearded dragon’s diet.

Which vegetables can bearded dragons eat?

Some of the vegetables that bearded dragons can eat include bell peppers, carrots, kale, cabbage, and asparagus.

Up Next: Can Bearded Dragons Eat Bell Peppers?

How Long After Deworming A Cat Are The Worms Gone?