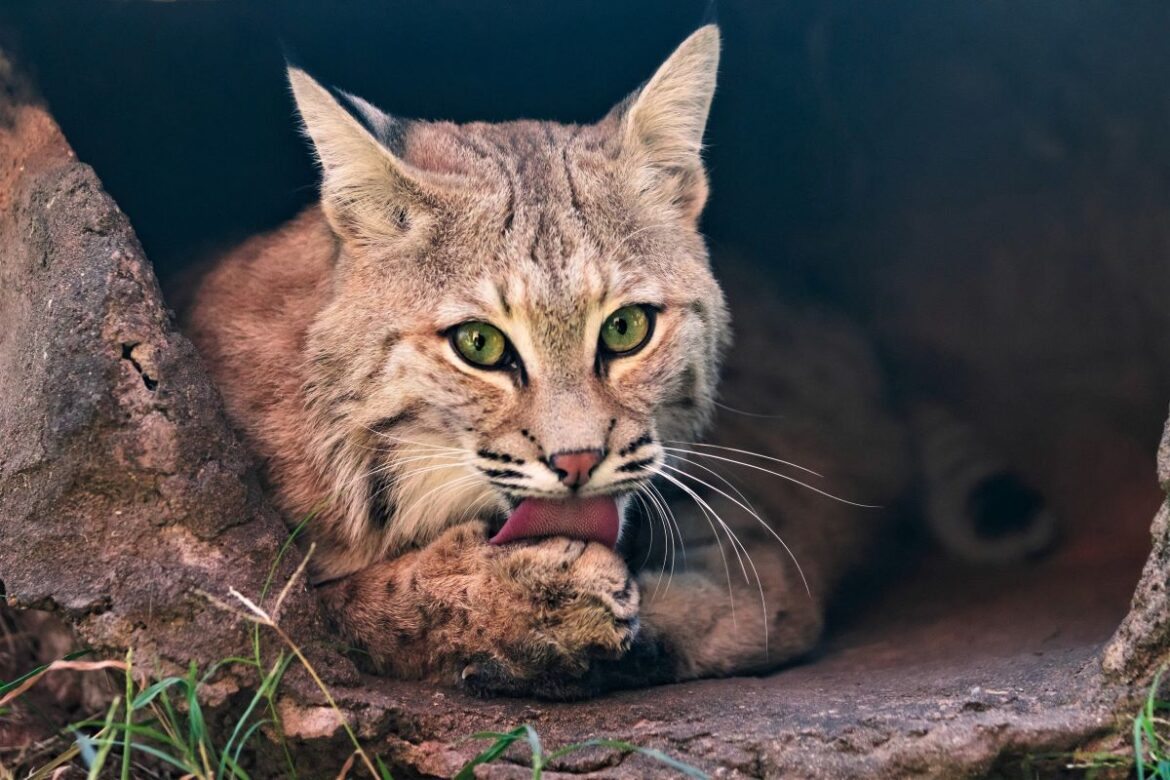 Bobcats are not seen very often, but when they are, it can be easy to confuse them with house cats. The two do appear similar at first, in appearance and size, but there are significant differences between the two.

What is the difference between a bobcat and a house cat? Bobcats are larger and more discernable than house cats. They most often have black spots and streaks along fur. Due to living in the wild and being active, their back legs are longer too, and their feet are broader. Their bobbed tail is also quite a tell-tale sign.

There are more signs that help you tell the difference between a bobcat and a house cat, even from when they are still kittens. And if you’re thinking of keeping that bobcat kitten you found in your yard anyway, think again; their differences go far beneath the surface.

Keep reading to find out more about bobcats and house cats, and how to tell them apart if you happen to run into a suspicious kitten.

How To Tell A Bobcat From A Domestic House Cat

There are several different species of bobcats, but they look very similar to one another.

Bobcats, while much larger, can appear similar to house cats. Knowing what to look for will help you identify a bobcat from a house cat fairly easily.

Bobcats generally have a reddish-brown coat, maybe with some grey, with a white belly underneath. Their tail is bobbed and short, which is where their name comes from.

The eyes of a bobcat are yellow-green, and their wide ears stand up straight right on the top of their head, usually with tufts of hair sticking out on the very tips. Tufts of hair also extend down their front legs and towards their rear.

Bobcats also often have black streaks along their ears and down their limbs, but their belly usually has black spots as well. When it comes to the back legs of a bobcat, they are much longer than that of a house cat. This gives them an appearance of being taller as well.

The feet of a bobcat are also broader than a house cat’s, and their tail is short and bobbed, whereas a house cat usually has a longer tail, unless they’re of a bobtailed breed (like the Japanese bobtail or the Manx) or it has been docked.

All of these differences in appearance can help you tell a bobcat from a domestic house cat, and they can even be noticed from a young age, in case you were wanting to know whether a kitten might actually be a bobcat! Believe it or not, mix-ups have happened many times before.

The Size Difference Between A Bobcat And A House Cat

A bobcat is definitely larger than a house cat, even when both are kittens. A bobcat kitten is around twice as large as a house cat kitten, and as adults, is about twice the size as well.

This size difference is accentuated by the back legs of a bobcat being long, making them appear taller.

House cats, on the other hand, can weigh up to 10 pounds when fully grown, and grow to around 9-10 inches in height at the shoulder. This is quite a difference in size!

However, as they grow, house cats meow and softly purr, whereas bobcats are known to make a sound similar to a crying baby, and can even be confused with a child or woman screaming for help – something that has woken people up in a panic in the middle of the night.

During the mating period, bobcats also make a loud, echoing sound, which indicates that they are competing for a mate. Sometimes their growls can even be so intense as to sound like roaring. Wouldn’t want to hear coming from outside your tent in the middle of the night!

Below is an informative video from The Animal Sounds channel on YouTube of all the strange sound bobcats make that can’t be mistaken for your friendly neighborhood Mittens.

Can Bobcats And House Cats Mate?

A bobcat and a house cat can technically mate, but it is very rare. There are some cases recorded of a bobcat and house cat mating and the resultant kittens, but it is not something that happens very often.

The resultant kitten from a bobcat and house cat is called a pixie bob. How a pixie bob looks will depend on which traits it has picked up from its parents, whether it appears more like a house cat or more like a bobcat.

These hybrid cats usually take quite a bit of the wild nature of a bobcat and can be quite wild or aggressive and not very affectionate. They definitely do not make as good a pet as a normal house cat!

Can Bobcats Be Domesticated?

No matter how young of a kitten a bobcat is, there is not much chance that it could be domesticated. The wild nature of a bobcat is quite overpowering, and while the bobcat could be reared and semi-friendly from young, the wild nature will take over.

There is also the case of keeping a bobcat being illegal in most areas, and permits would be needed to keep a bobcat as a pet.

Bobcats are wild animals who deserve to be left in the wild, and who should not be domesticated or even attempted to be domesticated. Their natural predatory instincts are very strong, and they will go back to their natural ways no matter how much domestication they have been put through.

A bobcat might become tame and not be aggressive to those who have raised them, but it will not be domesticated. Domestication happens through a genetic modification that is passed down over generations.

Some people who have found kittens in the wild have had to ask the question as to whether the kittens are house cats, or abandoned bobcat kittens. It is quite an important question to ask, especially if you are planning on raising the kittens in your home.

Here are the main differences between a bobcat kitten and a house cat kitten:

Bobcat kittens have shortened tails, and this is a very distinctive tail that should help you identify a bobcat kitten quite easily. It’s also just a bit longer than any bobtail ‘house cat breed’s tails, so you shouldn’t have trouble identifying it.

They have black-tipped ears and dark stripes along their legs.

The facial markings of a bobcat kitten are similar to that of a tabby cat, but the lines are more pronounced and darker. The coat of a bobcat also lends itself more to camouflage, which is something that house cats have lost over generations.

There are some purebred house cats that have bobbed tails, but these do have a different appearance from true bobcats.

Bobcat kittens are also larger and have longer back legs compared to house cats.

There is definitely a difference in behavior between house cat kittens and bobcat kittens, even from early on.

Bobcat kittens can be slightly aggressive and do not necessarily enjoy being handled, as they are unsocialized and not used to human interaction.

The sound that a house cat kitten makes is normal to what you would expect, soft purring and meowing. The sounds that a bobcat kitten makes are fairly similar, but a little more alien and rough around the edges.

As they get older, these noises become more pronounced and more guttural, and quite scary when heard in the middle of the night!

Differences Between Bobcats And House Cats

Considering their size and behavior, one being small and domesticated, and the other being larger and wilder, it is fairly easy to tell the difference between a house cat and a bobcat, especially when they are fully grown.

Here is a summary of the main differences between bobcats and house cats:

Bobcats and house cats might seem a little similar at first, but there are some monumental differences between the two!

Bobcats are larger than house cats and are not domesticated. House cats are smaller and love to live at home with their humans!

You are able to tell the difference between a bobcat and a house cat from very young, so if you ever find a kitten in the wild, make sure to remember these differences or check with a veterinatrian.

Can bobcats be friendly?

Bobcats are not domesticated animals, and while they can be tamed from young and trained to be fairly friendly, they will always have wild tendencies, such as a fiery temper, scratching things up, or bad house training.

Bobcats do their best to avoid people, as they are shy and reclusive. Only under severe circumstances will a bobcat be aggressive towards a person or a pet, and this is usually when they feel threatened or if they have cubs nearby.

Bobcats can meow similar to a house cat, but when threatened, they have a short, sudden cough-bark-like sound. They can also wail and sound similar to a child or woman screaming, which is a fairly alarming sound.

Up Next: Male Vs Female Cats – The Difference

Is Liverwurst Good For Dogs?