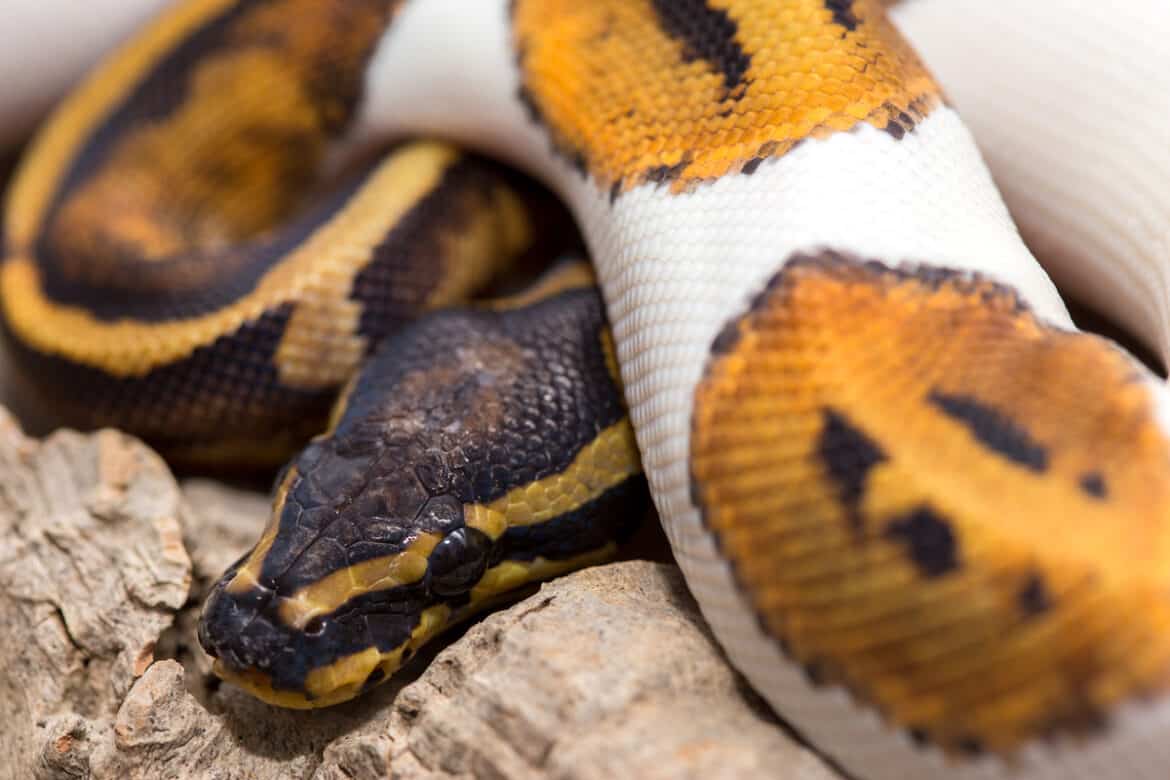 Snakes are carnivores. They will eat anything from an amphibian to a small-sized mammal. But, it is generally their species that determines their preferences.

But can snakes eat frogs? Yes, some snake species can and do enjoy eating frogs. Garter snakes of Central and North America feast almost entirely on amphibians. Asian pitvipers also feed on frogs, especially when they are young. And, Asian keelback snakes even feed on their tadpoles.

As snakes swallow their prey whole and hold to strictly carnivorous diets, it’s easy for pet parents can feed their pets nutritionally balanced meals. However, snakes in the wild sometimes try to feed on anything that’s warm and moves, and they can injure themselves this way.

Your beloved slithering serpent is not accustomed to the wild or the dangers involved in the quest of prey. So, exotic vets often recommend snake guardians to take great caution when feeding their pets. Let’s take a closer look at why some snakes eat frogs and why it’s not a good idea to feed your pet snake frogs anyway.

Why Can’t You Feed Your Pet Snake Frogs?

And don’t start thinking you can just go to the pet store for a steady supply of sterile frogs, either. Besides being far more expensive than traditional food, such as frozen mice and rats, frogs raised in captivity can still carry disease and bacteria such as salmonella.

If your snake contracts salmonella, it will have it for life. Your precious pet noodle won’t be affected, but if it passes on to you, you absolutely will be. While regular hand and tank washing will help prevent any disease from being passed to you or any other pets you may own, this is still a risk rather left untaken.

Also, frogs come in all shapes and sizes. They may look soft, but they do put up one heck of a fight. If your reptilian buddy has never put up with an altercation in its life, then it’s best to feed it tiny, pre-killed creatures. You’ll be saving your beloved pet from a world of injury, fear, and anxiety.

We’re sure you’re not thinking about feeding your snake a poison dart frog, but it’s worth mentioning that some species of frogs are poisonous or carry toxins.

Now, some snakes can actually handle the toxins some frogs produce, but we absolutely do not recommend giving it a try. If you have a common garden-variety snake, you will wind up killing them.

However, we have to mention the rhabdophis tigrinus snake, or tiger keelback, because this snake actually consumes toxic toads on purpose. Why? So it can use their venom for itself, of course! How cool is that?

What Do I Feed My Pet Snake?

In all honesty, some snake guardians feel squeamish about feeding their snakes any animal, dead or alive. So, the question arises, what should you feed your scaley friend?

Many pet stores offer pre-killed and frozen rodents as meals for pet snakes. These meals have been prepared to be free of toxins, germs, or any bacteria that can harm your pet. Each meal should be about as big around as your snake is and no larger.

Frozen-thawed rodents are a humane alternative to live feeding and are easy to come by. You won’t have to take frequent trips to the store either, if you don’t mind keeping a few in your freezer for later. Not to mention, feeding your snake pre-killed prey reduces the risk of injury, such as bites or scratches.

However, some snakes absolutely refuse to eat frozen-thawed mice and rats if they’re used to feeding live. In this case, you may have to keep feeding live prey, but you’ll have to keep a close eye on your snake to make sure they aren’t getting bitten or scratched.

Some snakes, such as garter snakes, are also insectivores and are happy eating insects like crickets and mealworms. Some will even eat small fish like gold fish and zebra danios (if you choose this option, be sure to clean their water bowl after meals).

Every species of snake will eat at a different rate, and some even eat more or less depending on their age, size, gender, and the time of the year. Be sure to do your research to make sure you’re not feeding your snake on the wrong schedule.

Some species, like ball pythons, are also more finicky about eating consistently than others.

It makes sense for many serpentine lovers to feel a little out of their depth regarding the diet and upkeep of pet snakes. They hunt alone in the wild and manage to do great for themselves on their own. But owning a snake means you are now responsible for feeding it the correct diet and keeping it safe.

So, here you’ll find many answers to commonly asked queries that will hopefully help you better provide for your noodly friend.

Are Snakes Attracted to Frogs?

Yes, snakes are attracted to frogs. Many snakes love to chow down on frogs and toads. It is part of their diet and just the way Mother Nature created them. So, when a frog calls out a mating call to a female frog, it invariably attracts snakes as well.

If you’re watering your garden and find the number of birds, insects, or frogs have multiplied, you’ll undoubtedly come across snakes too. Don’t worry; they keep the pests away!

Why Are Snakes Not Affected By Venom Found in Some Frogs?

Some snakes aren’t affected by the venom of even the most poisonous frogs. The tiger keelback can even retain the poison from other animals in their bodies and use it as a defense mechanism against other predators.

Many animal experts claim that it seems to be one of Nature’s quirks where even the fiercest defensive tools prove ineffective against a natural predator. Snakes don’t have to be immune to the poison of frogs.

Scientists have recently discovered that special digestive chemicals in the stomachs of some vertebrates (animals with backbones) break down venom very quickly.

So, some snakes’ digestive systems can quickly deal with the animal’s venom it just ate without any chance of harm being done to it.

However, there are some instances where the predator can become the prey. Snakes come in all sizes, and so do frogs. It’s rare when you find that a frog has eaten a snake, but, strangely, it has been known to happen! You’ll have to remember that it must be a tiny snake and a huge frog for such an abnormality to occur.

What Is the Difference Between Poisonous and Venomous?

When scientists speak about snakes, they talk more about being venomous rather than poisonous. Poison needs to be swallowed or ingested to be fatal, and venom needs to be injected into the bloodstream through a bite or sting.

It isn’t uncommon to find other animals that eat snakes. Many birds like hawks, falcons, and eagles eat snakes. And not just garter snakes; these birds can eat venomous snakes too.

But, they too have a trick that Nature has supplied to them. Bear with us through this graphic description, but these birds first catch their prey with their talons and then use them to separate the head from the rest of the body, discarding the venom.

Even more astounding than birds eating snakes is the fact that some other snakes eat snakes too. In fact, a king cobra’s diet largely consists of other snakes.

And, they can eat venomous snakes as well. Moreover, these snakes don’t even take off the heads of the snakes they swallow. It all goes down in one big gulp. There are no side-effects to be seen, not to the snake doing the eating, at least.

Studies have shown that were it not for these snake-eating snakes, the snake population would increase enough to put the entire ecosystem at risk. So, as you find larger animals eat smaller animals, you also witness more enormous snakes gobbling up smaller snakes.

In other words, it’s a snake-eat-snake world out there.

Like everything else on the planet, snakes need water too. If you keep a tropical snake in a vivarium, then you’re going to have to keep water around to maintain the humidity levels, and even a mister.

Just make sure to monitor your snake to make sure their environment isn’t too humid, as this can cause mold to develop in the tank and put your snake at risk. Too much moisture can also cause scale rot, which is when bacteria gets into a scratch or cut in a snake’s scales and spreads.

Also, water helps snakes stay hydrated and shed their skin. Snake keepers often amp up the humidity when their snakes’ eyes turn milky blue, a sign that they are about to shed.

So, a large ceramic bowl of water will allow your snake to refresh itself with a bath. And, some snakes eliminate in a water bowl as well as drink from it. It is absolutely vital to keep that bowl clean. Daily washing is a must if you want a happy, healthy snake.

Up Next: Do Snakes Get Sad?

Why Do Cats Run Sideways?