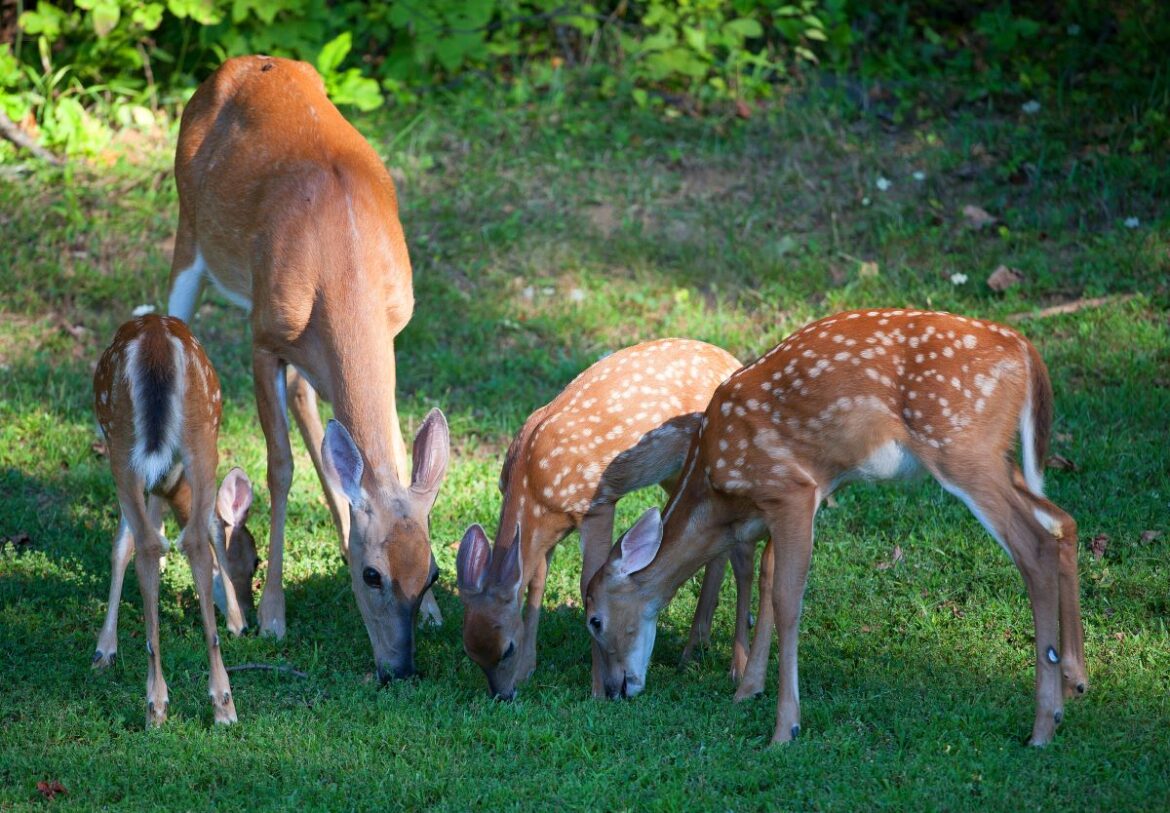 Deer species are to be found all across the globe in a variety of habitats, from the tundra to the rainforest. These magnificent creatures are truly a sight to behold. It’s a lovely surprise when the harsh winter weather comes around and you find a deer or two lingering close to your porch.

But when people see a deer trying to get their fill of dog food, they find the entire encounter a bit unbelievable. On the flip side, many animal lovers believe that since deer can eat dog food, it’s okay for them to feast on it on a regular basis.

So, will deer eat dog food? Yes, deer will eat dog food if given the chance. However, they shouldn’t be encouraged to do so. The prolonged consumption of dog food can cause chronic wasting disease in deer and even lead to injury or death.

It is a kind act to feed a starving animal, but deer are wild animals, and you should know that animal experts advise people not to feed them, particularly when you are clueless about their dietary needs.

So, without any further delay, let’s delve deep into what deer can eat and what things you need to be well aware of before you take it upon yourself to fill the bellies of all the deer in your neighborhood.

Why Do Many People Believe That Deer Can Eat Dog Food?

Dogs are omnivores. It is a general belief that dogs are carnivores because their primary source of protein comes from a meat-based diet. But, if you have a dog at home, you’ll know that most dog food brands include a relatively significant amount of grains in dry as well as wet dog food.

As most people looking to feed a deer already know that deer are herbivores, they naturally assume that it must be alright for them to eat dog food as the main ingredients of most dog foods are soy, corn, wheat, barley, or rice. These grains provide dogs with essential digestible nutrients, including protein, vitamin E, and linoleic acid.

So, the misconception that dog food is perfectly safe for deer takes root further as deer also need a rigorous boost of nutrients on an everyday basis.

What Are The Differences Between Dog And Deer Diets?

You must understand that these are two very different species that have evolved quite a bit to fit into their respective habitats.

However, the wolves of yesteryear have gone from vicious carnivores eating to the domestic pups of today that will happily nibble on a carrot just as quickly as a hunk of beef.

And, surprisingly, deer are found eating meat from time to time. But deer, in general, need to change their diet to get their fill of nutrients and their dietary needs are hugely different from those of dogs. Deer feed on grasses, plant shoots, seeds, fruits, herbaceous flowering plants, shrubs, and trees. The diet of deer changes with the season, and so do their metabolic needs.

Unlike dogs, deer cannot stick to one specific food source and sustain themselves for long. Their small stomach and high nutritional needs will simply not be met if you try to give them dog food as their daily meal. Not to mention, dog food contains meat protein that is not as easily digestible by deer. You see, the body of a deer isn’t equipped to digest that much meat-based protein.

So, if a deer feeds on dog food more frequently than it should, there is a strong probability that the deer may suffer from bloating from the indigestible matter inside its stomach and this can lead to starvation, among other unpleasant consequences. Also, if deer do make changes to their diet, they need quite a bit of time to adjust to them.

Yes, deer do eat dog food. While they are naturally herbivores, they have been known to eat meat on rare occasions. Usually, deer eat meat and indulge in scavenging behaviors when food is scarce or when they need to fulfill particular metabolic needs.

Scientists have observed deer eat from many meat sources such as fish, dead rabbits, live birds, and even human flesh and bones, as morbid as it sounds. It is theorized by many scientists that deer consume flesh when their bodies are in particular need of phosphorus, sodium, and calcium. Like squirrels, deer have very high nutritional needs, and these needs peak during the winter season.

When deer eat meat, they cannot digest such food with ease. In winters, the metabolic system of all humans and most animals go into overdrive. But, that is not the case with deer. The metabolic rate of deer goes down by half during winter as they become less active and use half as much energy.

This technique helps deer to insulate their bodies and survive. But that also means that you shouldn’t be feeding deer dog food in winter because they have a real tough time digesting it.

Is It Dangerous For Deer To Eat Dog Food?

You might have guessed by now that dog food isn’t the food source that you want your neighborhood-friendly deer to eat. You see, wet dog food doesn’t contain any plant-source food, so if that is what you have in mind for feeding the deer of the locality, then you’d be doing them more harm than good.

When it comes to kibble, dry dog food does contain a relatively high percentage of plant-sourced ingredients such as fruits, vegetables, lentils, or legumes. However, the other element, particularly the meat-based proteins present in dry dog food, makes dog food unsafe for deer.

Now, you might wonder what possible damage kibble can do to deer when half of what’s in dry dog food is what deer eat anyways. But, if you read on, you’ll find out about the detrimental health issues deer face when fed unsuitable diets.

Deer gastrointestinal pH and microbiomes are severely affected when their diet changes abruptly. When a large number of carbohydrates are consumed by deer hastily, they can suffer from acidosis and bloating.

Deer metabolism slows down significantly in winter, and if bloating is acute, there are high chances that the deer might die. Deer can also die if they come across a large pile of food and devour it on an empty stomach.

Chronic wasting disease is a fatal neurological illness that spreads in deer through contaminated body fluids, tissue, drinking water, and food. Deer with CWD show many symptoms such as listlessness, stumbling, drastic weight loss, and other neurological disorders.

In most cases, animal experts recommend not to feed deer at all, especially if one is inexperienced about deer welfare or uninformed about the dietary needs of deer. But, if you feel that the deer in your neighborhood are dying of starvation, you should first inform yourself about their essential dietary needs.

It might sound hard to believe, but deer are known to die of starvation even when their tummies are full of food. The only difference is that the food in their stomach is full of indigestible matter. Unfortunately, deer gorge themselves on any food sources that they can find during the harsh winter season to build up their fat reserves.

You have to understand that deer aren’t discerning or picky eaters. They will eat almost anything you put before them when they are hungry. So, if you put dog food before deer, they might eat it if they are starving.

When deer consume large amounts of carbohydrates, especially grains such as corn or soy, they can suffer from the adverse effects of enterotoxemia. This is also known as ‘grain-overload,’ caused by a bacteria known as Clostridium Perfringens Type D that can bring about convulsions, diarrhea, and even death.

Sometimes caring for the wildlife around your home can bring happiness, contentment, and inner peace. There’s no denying that it’s a very novel and noble sentiment, which is why you won’t find a single neighborhood without a bird feeder in sight.

But, sometimes, you need to become well-informed about specific details when you want to help a particular species of animal out and save it from starvation or the severity of the changing weather.

Dry dog food might have plant-sourced foods, but meat protein is the main component. Meat protein isn’t safe or suitable for deer. Not to mention, deer shouldn’t be fed close to each other anyways to avoid the dangers of fatal diseases such as chronic wasting disease.

If you want to prevent deer from facing harmful health concerns such as bloating, starvation, CWD, or Enterotoxemia, then you should take great care about what you offer to the deer in the neighborhood.

Up Next: Can Dogs Eat Potato Salad?

Cat Depressed Wearing Cone – How To Cheer Them Up

How To Make Your Own Bully Sticks