Home Dogs Why Are Chihuahuas So Angry?
Dogs

Why Are Chihuahuas So Angry? 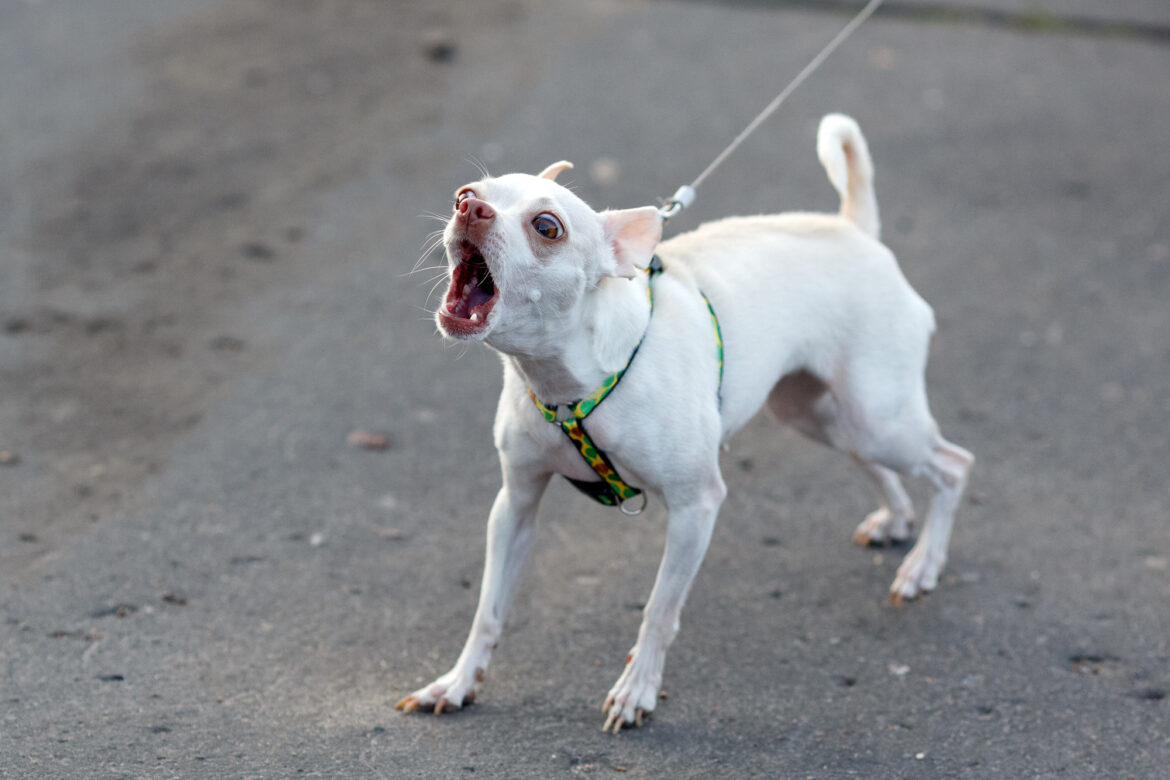 Chihuahuas, a small little body with a huge personality! You will not find a dog with more sass than a tiny Chihuahua, and this is quite endearing until their anger becomes a bit of a problem.

Being the smallest breed of dog, Chihuahuas need to make themselves seem bigger with their personality, but a big personality doesn’t always have to mean anger.

So, why are Chihuahuas so angry? Much of a Chihuahua’s anger comes from them being small. More accurately, it is often because of the way that people treat them because they are small. Chihuahuas need to be treated just like any other dog, and owners tend to forget this.

If you are looking to bring a Chihuahua home, or you have a particularly sassy one in your household, keep reading to find out why the breed tends to have a stronger personality than dogs five times their size!

Why Chihuahuas Are Angry

Not all Chihuahuas are angry or sassy. Yes, they might have strong personalities, but if given the right training, socialization, and care, they can express their personalities in a more relaxed manner.

The root of the angry behavior most often comes from owners not giving their Chihuahua the right guidance.

Being small is not always such fun, and Chihuahuas are looked down on by their owners and other pets (literally), and may not feel as though they are always taken seriously.

Their physical size does not directly relate to their anger, but rather the way that their owners treat them because they are this size. Chihuahuas are still dogs and need to be treated as such. They should still be trained and socialized to form proper behaviors, and shouldn’t be smothered constantly.

It can be easy for owners to excuse bad behaviors from their Chihuahua because they are so small and their bad behavior does not have such serious consequences as bad behavior from a bigger dog. So, often this bad behavior is never corrected, and this is what allows it to escalate with no consequences.

By not correcting bad behavior and anger, your Chihuahua thinks it is okay to show you their bad side, as they have never been told not to!

A Chihuahua should never be allowed to snap or growl at you, and while it might seem hard to correct such a small little pup, you should not let them get away with things that you wouldn’t let a bigger dog get away with!

Chihuahuas are not angry dogs by nature; they are loving, calm, and caring just like any breed, but if you do not take the time to train and socialize them properly, or teach them which behaviors are okay and which aren’t, then they can develop aggressive personalities, just like any other dog would.

Yes, it might be funny to see an angry little Chihuahua running around the house barking like a mad person, but it really is not healthy for them. At their core, Chihuahuas are loving, fun, and caring dogs, and should not have to suffer any stressors that would make them act out.

By not showing your Chihuahua the proper behavior and giving them guidance on how to act, they will be in a constant state of stress and anxiety. This is especially true if they’ve never been socialized and are barking at every little noise outside the house as a result. This means your Chihuahua is in a constant state of fear, and that’s not healthy for anyone, man or animal.

Chihuahuas also get confused and become stressed if you’re not showing them consistency. You might be letting them get away with bad behavior sometimes, but then react negatively when they do it again. This only adds to the chaos.

When your Chihuahua is angry, growling, biting things, running around, and ripping things up, it shows that they are in a state of panic. It might seem harmless coming from such a small dog, but to your Chihuahua, this stress can cause some serious medical issues.

A Chihuahua who gets aggressive is just the same as any other dog; the only difference is that there is more of a likelihood of bad behavior not being stopped from early on.

You would also not want to be in the position where your Chihuahua has bitten a guest or another animal because their aggression has not been kept in check. Your guests and other animals do not deserve it, and neither does your poor Chihuahua who doesn’t know any better.

How To Solve Anger Issues

Anger issues have likely developed in your Chihuahua because they have not been shown the right way to behave, and their bad habits have not been kept in check. If you give them attention every time they start to fuss and moan, why would they stop?

However, it is never too late to try and solve the anger issues that your Chihuahua has, and it might be the best option for the whole family.

Possibly the best thing to do would be to sign your Chihuahua up for training sessions run by a professional dog trainer. Through these lessons, you will be able to learn the right techniques on how to correct bad behavior, as well as how to calm your Chihuahua down when they are angry.

If your Chihuahua’s anger leads to them shaking and panting quite a bit, it is also worth taking them to the vet. There might be something you can do to lessen their anxiety and stress, as if these are left unchecked, can cause some serious health issues later on.

Other Reasons Your Chihuahua Is Angry

Other than not being taught the right behaviors, there are some other reasons that your Chihuahua might be angry.

A female Chihuahua might be slightly more sensitive when they are on heat, which is around twice per year or every six months. If your Chihuahua is usually happy and calm, but all of a sudden is angry and on edge, this could be why.

The best way to deal with this problem is always to get them spayed, as it will not only result in less behavioral problems for you to deal with but also your poor Chihuahua’s own peace of mind. She will be far more relaxed and less stressed.

However, if you are a breeder or there’s another reason your Chihuahua can’t get spayed, try and make her comfortable by offering up her favorite food and a comfortable place to rest. You can also consult your veterinarian for calming medications and other methods for diffusing her frustration.

You might not have noticed it, but you could have been focused elsewhere lately, or something else might have changed in your home that has led to your Chihuahua to getting less attention than they are used to.

If they end up spending too much time alone, and they aren’t stimulated properly, your Chihuahua could lash out in anger. This would come from the sadness of being left alone, pent up energy coming out, or attention seeking.

It isn’t fair to leave your Chihuahua alone for extended periods, and it is even more unfair if they then get into trouble for bad behavior because of this.

Just like humans, dogs can suffer from depression, and it can be caused by a few things. You may have moved into a new home, their companion may have passed away, or you might have brought a new dog into the house.

A good sign that your dog is not happy is if they are acting angry, as this is how they might feel is the only way to express themselves. Periods of sadness or depression might present as anger, and if you notice this, then you do need to look to see if there have been any changes that could’ve caused this anger.

It’s also a great idea to talk to a veterinarian to see if there is a medication or practice you can adopt to help your pup through their depression.

A Chihuahua, just like any other dog, needs interaction and affection to be happy and healthy. If you keep your Chihuahua at home and never expose them to other dogs or other people, especially if you cannot give them enough attention, it could lead to fear and aggression toward people and animals.

Dogs feel an instinctual need to protect their pack, or family, and if they are not taught at a young age that the mail man, guests, and animals passing by are friends, they will lash out in fear and anger, thinking they are protecting someone or something.

Social interaction is so important for dogs, especially for such small dogs that need to make up for their lack of size with aggression in order to protect themselves.

The bottom line is that Chihuahuas are not angry dogs. They are loving, energetic, and friendly and can be incredible companions. The reason that people consider Chihuahuas to be angry is that owners do not train or socialize their Chihuahuas properly, and excuse bad behavior because it seems insignificant from a small dog.

Chihuahuas deserve to be shown some guidance and training from a young age, and with proper socialization, care and affection, they will be the opposite of angry dogs!

While they are the smallest breed, Chihuahuas can be some of the neediest dogs. They absolutely love being with their owner or members of their family, and often Chihuahuas can suffer from jealousy too.

You should only consider bringing a Chihuahua home if you can dedicate a lot of love and time to them!

Chihuahuas are not the smartest dogs around. They are below average when it comes to obedience and working intelligence, but in their defense, they do have high adaptive intelligence.

This in no way takes away from the love and loyalty that a Chihuahua can show, and that they can be the perfect pet for the right family!

Up Next: Best Pink Raincoats For Dogs

How To Make Your Own Bully Sticks

Is Liverwurst Good For Dogs?

Yellow Balls In Dog Poop – What They...

Dog Sounds Congested When Sleeping – Should You...